The Virginia General Assembly began the 2021 session on January 13th and concluded on March 1st. Although this year’s session was intended to be a “short” 30-day session, rather than the 60-day “long” session that is conducted in even years, Governor Northam called for a special session and Legislators met for an additional 15-days to complete their legislative work.

Democrats entered their second session with a “Democratic Trifecta” meaning the Democratic party has control over both legislative chambers and the Governorship. In 2021 there were 55 Democratic members of the Virginia House of Delegates and 45 Republican members. In the Virginia Senate, Democrats hold a slim 21 seat majority to the 19 Republican minority.

This has been a busy session for VIADA. There were 1,092 bills introduced in the 2021 session, it is important to note that this is the first year in which limits on how many bills an individual legislator can introduce were in effect. Of those 1,092 bills, 622 passed, 447 were killed and 23 were consolidated. 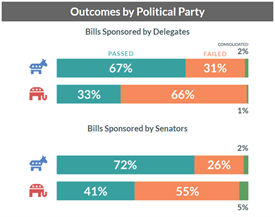 Our team at VIADA and Spotts Fain Consulting were actively tracking four bills in the House of Delegates and one bill in the Virginia Senate. Our priorities going into this session were to protect and be the voice of independent automobile dealers in the Commonwealth. Here is an overview of Dealer Focused legislation that we tracked:

2021 is a critical year in Virginia, all three statewide offices (Governor, Lt. Governor, Attorney General) and all 100 seats in the Virginia House of Delegates are up for election in November (The 40 seat Virginia Senate is not up for election until 2023). Virginia’s 2021 elections will be a national bellwether test after last year’s national elections.